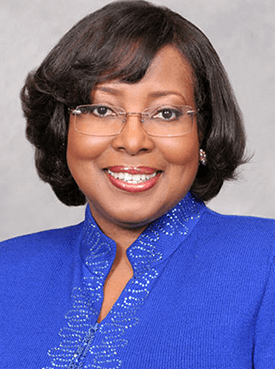 Dr. Camille Davis-Williams received her bachelor of science from Emory University and completed her medical degree and residency training in obstetrics and gynecology at the Emory University School of Medicine. She is a board-certified OB/GYN and a fellow of the American College of Obstetricians and Gynecologists (FACOG).

Since 1987, Dr. Davis-Williams has provided healthcare for women in the metro Atlanta area through her private practice, Greater Atlanta Women’s Healthcare. As a native of Georgia, she understands that improving the health of women in our community directly impacts the health of our men and children.

Dr. Davis-Williams has received many citations and accolades. She is a member of the Academy of Women Achievers for the YWCA of Greater Atlanta. She is listed as one of the “Best Doctors in America” as a result of a national survey of physicians that honors about 5% of all doctors in the US. She received the coveted Physician of the Year award from the Atlanta Medical Association and has been cited as a notable woman in Georgia’s History: Pioneer in Health Care by the Secretary of the State of Georgia. In 2019, Dr Davis-Williams received the Nash Carter Award from the Atlanta Medical Association. The AMA, established in 1890, is one of the oldest organizations for African American physicians in the nation and the Nash Carter Award is the highest honor that can bestowed upon a member.

An active participant in her community, Dr. Davis-Williams has fulfilled several professional appointments as a consultant and served as an elected delegate from the 4th Congressional District of Georgia to the Democratic National Convention in Charlotte, NC in 2012. She is married with a son and daughter and enjoys traveling and spending quality time with family and friends.

Register or sign in to request appointments, complete forms, access your medical history, view test results, and more. From your portal account, you can communicate us with from wherever you are.

A great resource for gynecology patients and expectant moms, our online patient education library contains information on numerous women’s health topics to help you understand your condition or upcoming treatment.